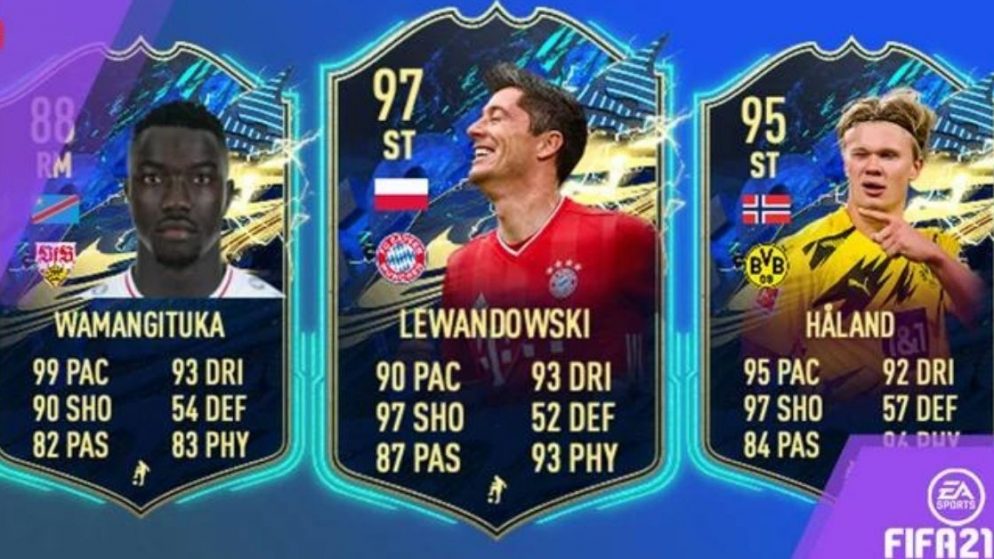 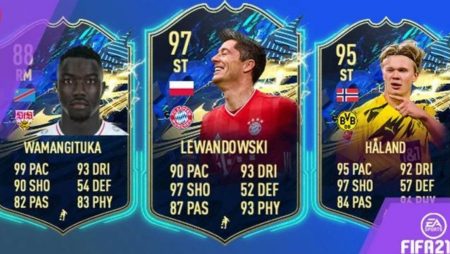 Around two weeks in, the TOTS hype is still going strong in the world of FIFA Ultimate Team. We’ve had the Premier League TOTS and then the La Liga TOTS. Another week calls for another league to be featured in our TOTS promo and this time it’s Bundesliga. As it has become a tradition here at esports betplay, this week we’ll be listing down the top Bundesliga TOTS 20/21 cards.

Maybe not as hyped as the Premier League or La Liga cards, but Bundesliga is promising when it comes to offering us some really meta cards. The Bundesliga TOTS has definitely delivered on that promise this time. Quite unexpectedly, there are some seriously good cards this year. Before we hop into the ranking, we understand that not all of our fans may agree with the list but that’s okay! So, we’ve tried our level best to pick out the top 5 cards of the Bundesliga TOTS.

We’re kicking off our Bundesliga TOTS with the mental Jadon Sancho TOTS card. If 96 pace, 94 shooting, 93 passing, and 98 dribbling doesn’t stir up trouble in the Weekend League, then we honestly don’t know what does. His 5-star skill moves and a 4-star weak foot further add fuel to the fire. As for traits, he has quite a few including flair, outside foot shot, and finesse shot traits. All of this just justifies the almost 3 million coin price tag that he’s currently going for in the PS4 market.

Alphonso Davies is a surprise guest appearance in the Bundesliga TOTS but let’s not deny the fact that he is one of the best full-backs this FIFA. The stats on his TOTS card are stacked with 99 pace and 93 dribbling. He also has 4-star skill moves and a 4-star weak foot to go along with those stats. His flair trait might also come in handy, especially if you like attacking with your full-backs. You should also be okay with his high attacking work rate in this case only. Linking him might be a bit difficult unless you coincidentally have one or two of his teammates- preferably TOTS Coman or Goretzka. A notable aspect about this card is that his work rates and stats make him capable to be played as a central defensive midfielder.

Another full-back to be featured on our list is TOTS Nordi Mukiele. We know what he is capable of in FIFA 21 thanks to his 84-rated Halloween card which was available via objectives at the beginning of the game. 94 pace, 90 dribbling, and 90 physicality definitely make him an insane choice as a fullback in this last stage of the game. A Sentinel or Anchor chem style should really boost his stats, especially his defending figures. We wouldn’t be surprised though if this 6’2” defender gets played as a centre-back.

The TOTS Leon Goretzka card is simply unbelievable… period! Pace, shooting, passing, dribbling, defending and physicality- literally all of his stats are at least 90 or above. His stats are so good that even a basic chem style suits him well. 4-star skill moves and a 4-star weak foot suit him just right. His med-high work rate is pretty okay, though a high-high work rate would complement him much better. If you have a plan of creating an endgame Bundesliga squad, you really need to make a midfield around this guy.

Nobody expected a card of this stature in a centre-back to show up at the Bundesliga TOTS. Maxence Lacroix TOTS is one of the best centre-backs to grace FIFA 21 and that’s a fact. In fact, this card is so good that he’s currently extinct on the PS4 transfer market. We have a shortage of meta centre-backs in this game, to begin with, and EA has answered with this card. He provides perfect links to a number of usable cards as well- Flashback Roussillon, TOTS Baku, and even What If Mbabu. Just imagine facing this and TOTS Varane in the same team!

And there you have it with the Bundesliga TOTS 20/21 rankings. Have you enjoyed our TOTS rankings thus far? Let us know in the comments!